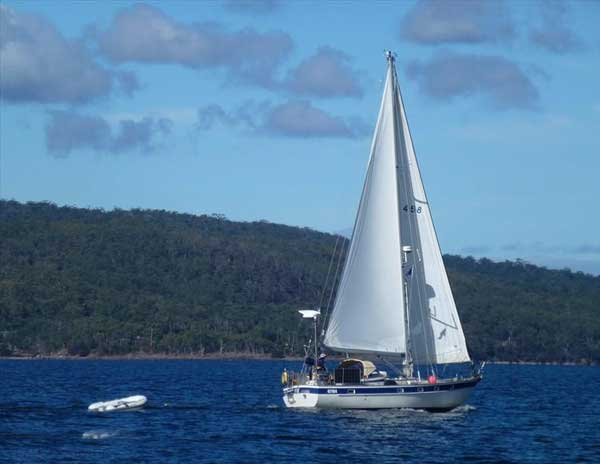 (This article was originally published in Albatross April 2017, magazine of the Cruising Yacht Club of Tasmania')
by Andrew Boon, Commodore, CYCT, May 2017


I won’t bore you with descriptions of the fantastic weather, terrific anchorages and great company that we found during this year’s trip to Port Davey and Bathurst Harbour on board SY Juliet. Except, perhaps, for a couple of highlights.


For many years I have been accompanied by a friend from Melbourne, Rik. He and I started as business associates (we were co-directors of a company providing communications consultancy services, mainly to emergency service organisations). We are both communications engineers and, perhaps unsurprisingly, radio amateurs (callsigns VK3EQ and VK7AW). Recently Rik has taken a serious interest in an amateur radio pursuit known as SOTA – Summits On The Air - rather like the Abels for bushwalking. The aim is to contact at least 4 other amateur radio stations from the top of the designated summits, which must be at least 250m above sea level and ‘prominent’ from their surroundings.

From the start, things went much as last time: Sat Feb 25th, Hobart to Butlers Beach for the first night, next day to Louisa Bay for lunch then overnight at New Harbour. Weather fine and calm. From New Harbour we sailed to Spain Bay and that afternoon climbed Sunset Hill, which is a SOTA summit. No track, but a straightforward walk and Rik achieved the required number of ‘contacts’ on the 7 MHz band from the top.


Next day we walked from Spain Bay to Stephens Bay, had a quick look at the beach then came back a short distance on the track from Spain Bay, headed west and bush-bashed to the of Going Hill (SE of Hilliard Head). This was a serious effort and took over 9 hours by the time we got back to Juliet, but again, Rik managed to contact the required number of radio amateurs on 7 MHz.


Incidentally, the name Going Hill might sound like another of the utilitarian names of the area (Morning Hill, Smoke Signal Hill, Sunset Hill, etc), but it is actually named after Philip Going, second officer on HMS Havannah which was undertaking survey work in Port Davey in December 1850. Going was in command of Havannah’s tender, HMS Bramble. Rik was reading my copy of Tony Fenton’s History of Port Davey (Vol 1) in the days following the walk and uncovered this information. Well worth a read!


Next day, we moved into Bathurst Channel and anchored in Iola Bay, alongside Jannali with Martin and Cindy aboard, nearing the end of a 12-month cruise around the Pacific and in no hurry to get home to Hastings (Vic). No time for socialising, though and we jumped into the dinghy and headed to the start of the Mt Rugby track. I think it was my 6th ascent but, with an enthusiastic partner, how could I not go again. We got to the top, set up Rik’s gear and he made the required number of contacts. Three summits in three (fine and warm) days. These summits were all previously unconquered (by SOTA participants), so Rik goes into the record books for the first activations. We then decided that our bodies needed a rest, so we threw away the list of the other SOTA summits.


After a night in the southern end of Moulters Inlet and a morning aground at the mouth of the Old River (very low tides!), we headed to Claytons Corner. The rainwater tank feeding the jetty was empty, due to uncertain causes (more work needed here). Drinks with crews from Hurtle Turtle, Cynecia and Aurielle on board Hurtle Turtle, then next day up the Inlet to Melaleuca without incident (ie we did NOT run aground!). We had some electrical work to do at Melaleuca which took several days and we caught up with the start of the Friends of Melaleuca working bee before heading for home. 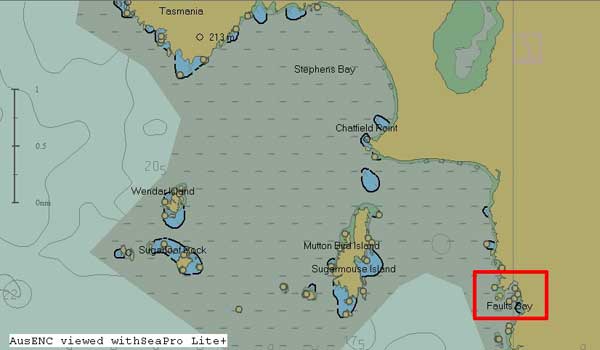 Last year, we were in company with Stormfisher with Chris Palmer and Ben Maris on board. Ben’s son is a fisherman and Ben had inside information on an anchorage known as Faults Bay, which is where Stormfisher stopped for lunch on the way home. This resulted in the establishment of the Faults Bay Luncheon Club, a very exclusive group (membership two until very recently!). The day Juliet left Port Davey was, as usual, fine, warm and calm, and we decided to look for the inlet at Faults Bay. We had about a 1m SW swell, which made conditions straightforward to enter the inlet and anchor. The inlet has about 12m of water at the entrance and we anchored in about 6m over sand, with kelp on the rocky shore on either side and a sandy beach at the head of the inlet. After lunch, we drank a toast to the inaugural members before departing. 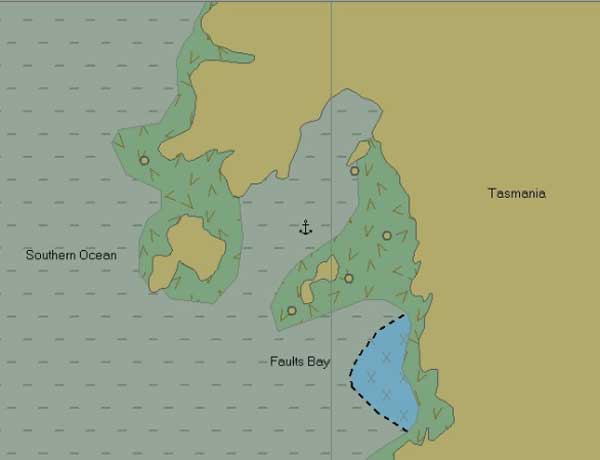 Our dalliance for lunch put us a bit behind time, so we anchored in New Harbour for the night. Next day, we had a quick sail across to Maatsuyker Island where we examined the anchorage at the base of the old haulage. Next time! The Quarries was our last anchorage for the trip. It was only on the last day (Sat Mar 11th, The Quarries to Hobart via Quarantine Bay, coffee and scones on Dalliance) that we had to break out the wet weather gear for the fog and drizzle that the Channel served up. Quite a contrast to the summer conditions that the SW had been having!