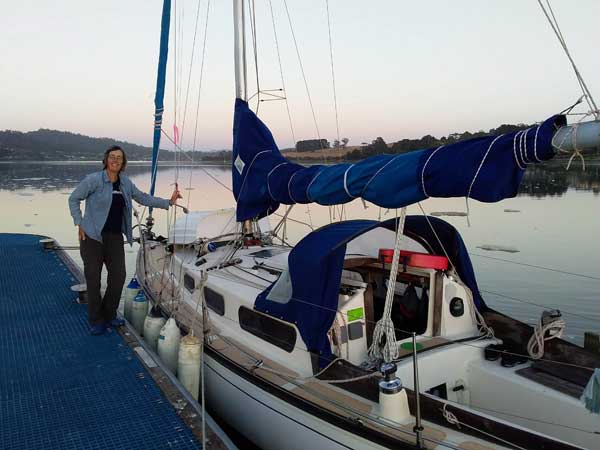 Around Tasmania or bust

The adventures of Adam, Anna and Alibi,
the very small Compass Northerner 28.


The roots of our Tasmanian circumnavigation were solidly terrestrial. We spent two years volunteering for Tasmania Parks & Wildlife; Deal Island, Maatsuyker Island, Bruny Island, Maria Island, Schouten Island as well as Cockle Creek and Melaleuca on the “big” island. Well, if you spend that long staring at the sea and reporting on the weather, you HAVE to go sailing. At this time we got to know Coast Radio Hobart (as it was named back then). Barry invigilated our radio exam at the old base and, on Maatsuyker Island, the skeds and our chats with the operators were a real feature. We also honed our radio skills chatting to the fishermen who appeared and disappeared with the changing weather. 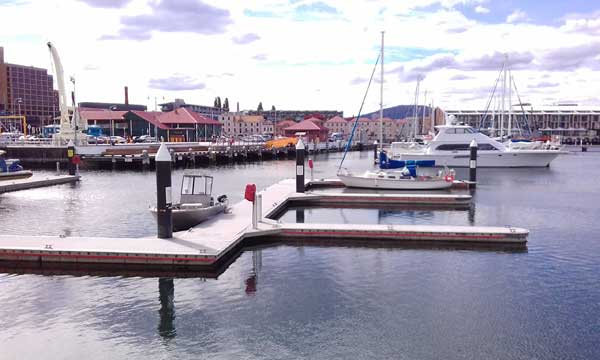 So, having decided to sail around Tassie, we bought a boat in Sydney and headed North to Bowen (navigation not being a strong point early on). When it got too hot (the butter didn’t so much melt as evaporate), South we sailed to face the distinctly scary Bass Strait. Just a suggestion, reading every article and book about Sydney to Hobart race disasters before leaving is not a great idea. Having duly logged on with Tasmaritime Radio and spent 10 days in every cafe in Eden, we had a dream of a crossing to Coles Bay - where we finally logged off our journey with Tasmaritime and collapsed, exhausted to sleep - only to be woken 10 minutes later by a fish that had jumped on deck and was flapping about - in my waking daze, I thought it was a seagull tap dancing!


After a very pleasant time floating around the East Coast, Channel, Storm Bay and suchlike, (the trip around the Tasman Peninsula is a real highlight), our minds turned to the trip around Tasmania. Could a 28 foot yacht, built in 1976 really the journey through the Bass Strait and down the West coast? Would we sink with all the food and safety gear? Would the wind ever go the right way? 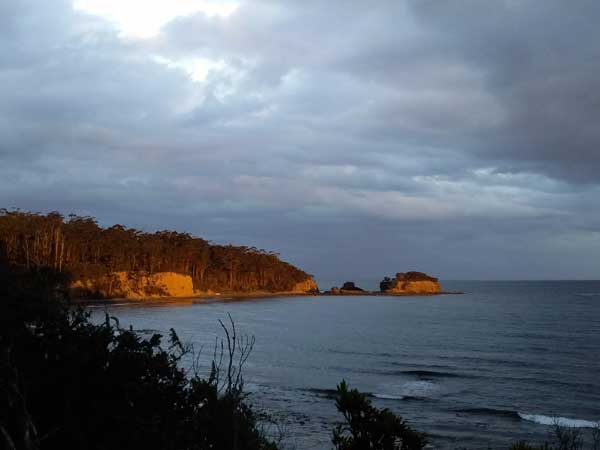 After some frantic maintenance, off we went. We zoomed across Storm Bay to Nubeena, where we were invited to a BBQ at the Aquatic Club, and then revelled in the “Unzoo” at Taranna (and the nearby, excellent pizza restaurant). We loved the bizarre location of The Neck anchorage, with the strolls to Pirate Bay and the Tessellated Pavement. Then through the Dunalley Canal and, under sail all the way, out of the Marion Narrows.


A couple of days in Triabunna were required to stock up on fish & chips and attend the excellent “Festival of Small Halls”, then up to Maria Island and Coles Bay where a local greeted us with, “would you like some flathead fillets, I've caught too many”. Out of the blue, a rescue mission, the Caretakers on Schouten Island had left their Australia Day booze supplies back at Coles Bay. Alibi to the rescue.


Up the East Coast with a big following wind and sea, stopping at Bicheno, a really delightful spot, and St Helens with its handy MAST cruising moorings.The wind promised Southerly turning Easterly with the change just as the tide turned at the Banks Strait. How could we resist? Turn left at Eddystone Point, what could be simpler? At midnight we set off and sailed all the way to Low Head in the Tamar - even the Banks Strait was calmed by the fortunate conjunction of wind and tide. On the way we stopped at the Stony Point anchorage - one of those stops that doesn't seem to exist until the last minute. Obviously, we went into the Tamar in the dark, there are lights everywhere.


After Australia Day at the Low Head Golf Club, we sailed all the way up the Tamar, exploring every scrap of the river, including dinner at the excellent Rosevears Hotel on the way up AND back Launceston was a great stop for cafes, the gorge, engine repairs, hipster cafes and an excellent Farmers’ Market. After the normal wait for the weather window, off we went again. Port Sorell for a swirly wind against tide experience then Ulverstone with its tricky wharf and tight maneuvering, not helped by arriving smack in the middle of race day.

We zoomed down the coast on a strong following wind to the delightful Stanley for a night, a stroll and excellent seafood. Then a mad beam reach up to the top of Three Hummock Island. There’s a very tight, one day, weather window so off we go to Strahan. We arrived at the calm, protected waters of Pilot Bay, outside the entrance to Hell’s Gate, in the pitch black (again!). With a lot of trepidation we anchored up to await the fearsome maelstrom of “the gate”.


The next day it was so calm that we actually stopped in Hell’s Gate to take photos and chat to a passing fisherman - another fear conquered. 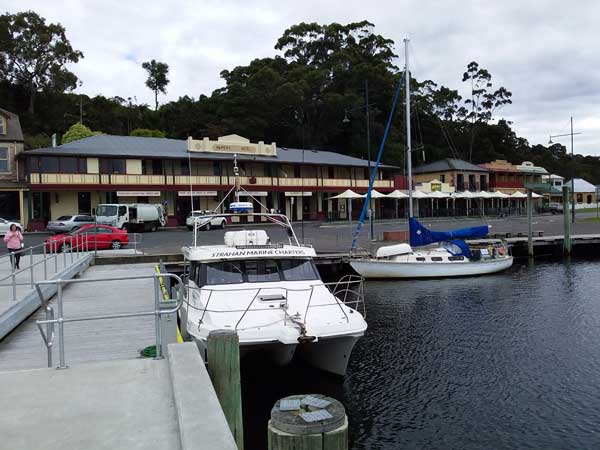 Strahan is a delight. In the cafe we met a yachtie looking type. It turned out to be Ian Johnson, author of the excellent “The Shank”, the new and swanky guide to the South West. Ian needed crew to go to Kettering, so we jumped ship and visited impossible anchorages, caught cray and tuna,installed stainless steel anchor points and generally had a big experience. We are sworn to secrecy about the location of our cray catching spot.


Then we had to get back to Strahan. The State Government had kindly cancelled the Hobart to Strahan bus service whilst we were at sea, but we got there anyway. We had left Alibi at anchor in the sticky, excellent mud of Mill Bay - a local had lent us a mooring, but when we tied up to it and I realised that I could pull both ends up on to the deck and return the person’s mooring in a wheelbarrow, anchoring had seemed a better option.


Alibi had survived the gales so off we went to explore Macquarie Harbour and the Gordon River. Absolutely stunning. We achieved another first by anchoring between two spots on the banks of the Gordon in a scallop in the river bank. We rowed right in to Sir John Falls in Toto, the tiny tender. Back to Strahan and a magical spot on the jetty right next to the pub. We did all the tourist things, including the ABT railway, whilst waiting for that mystical weather window.


We intended to anchor overnight between Strahan and Port Davey, but the tail end of massive swells made it untenable. So, once again, we arrived at 3am in the morning. Port Davey is no place to be navigating by the smell of the tea trees! We slept in full gear just in case, only to awake to a perfect anchorage and a perfect sail across Port Davey, between the Breaksea Islands and up Bathurst Harbour. 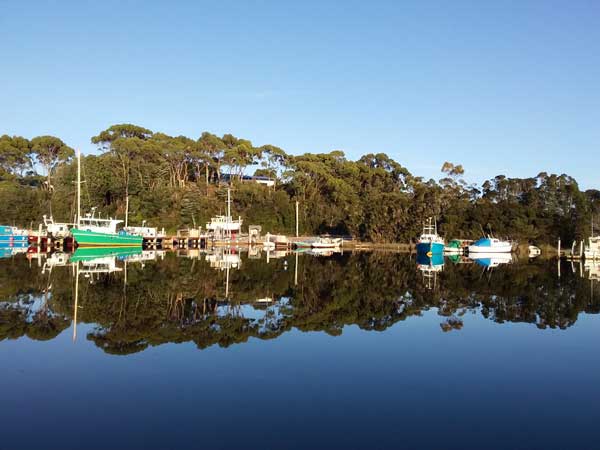 We played at being Win and Clyde at Claytons corner, meeting Janet and Geoff Fenton again and, yes, you guessed it, waiting for the weather. Now we REALLY depended upon the Tasmaritime Radio sked as there is no internet in the wilderness.


At last, something bearable seemed to appear on the weather front and we ventured out to Spain Bay for an uncomfortable and unsettling night. Our fevered imaginations suggested that the wind was way higher than forecast and surely there is too much swell wrapping into the bay. Leaving Port Davey the next day was right on our limit and there was some discussion about turning back. The sea was confused and the wind varied continually. When we turned South towards South West Cape things got even less pleasant. Whilst not dangerous, the strong wind on the beam, swell on the beam and the big reflections from the cliffs were trying. “It’s only 11 miles, it’s only 11 miles”, I said to myself, as the gunnel dipped under the foaming waves again.


Finally we turned left to run along the South Coast, the wind and swell on our tail. It was so much better. We radioed in to Maatsuyker for some Caretaker to Caretaker chat, passed De Witt Island and then, right on dark, the left turn into Recherche Bay; the sea, wind and swell dropped out. Peace.


After an explore and yachtie catch up, we went to Southport the long way, via an overnight stop in the amazing Cloudy Bay on South Bruny. From Southport, another delightful town, we ran up the channel under sail, crossing our theoretical finish line at Partridge Island. Not wanting to quit this magical trip, we had a final night at Peppermint Bay before rejoining civilisation in Kettering.


So the answer is yes, a 1976, Aussie yacht with ”2 POB” can circumnavigate this amazing island. I don't think we saw any cruising boat as small in the whole trip - one passerby commented, “You went into the Southern Ocean in THAT?”, but these old full keel, sea kindly and sea worthy boats are tougher than size alone would suggest.


People ask us, ‘“What is the best bit?”. The answer, all of it. Scenery, wildlife, people, boats, it is all a great experience. However, the Tasman peninsula, the Gordon, Port Davey, Bathurst harbour and the sail from Port Davey to Recherche Bay are all “must do” for any Australian yachtie. 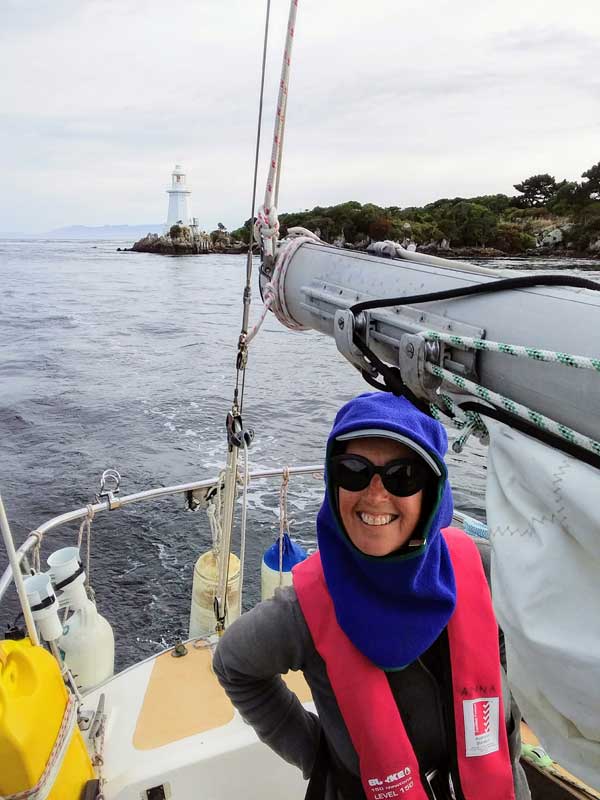 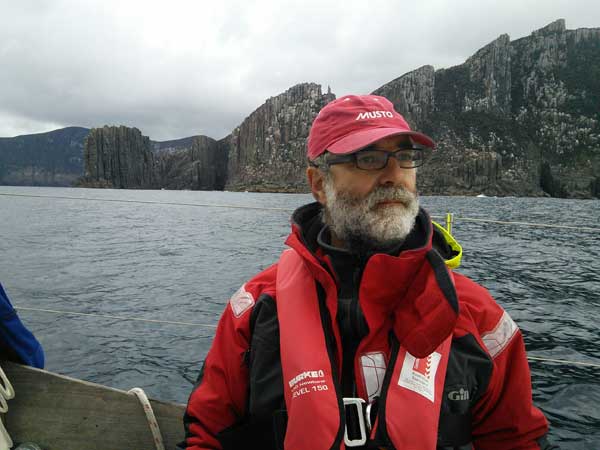 So our thanks are to Tasmaritime Radio for their fantastic service, MAST for excellent facilities, Tasports for being great to the small cruising yacht, the cafe owners of Tasmania for keeping the caffeine levels up, the CYCT, Royal Yacht Club, Jack & Jude, the CYCV, Ian Johnson and MAST for their excellent cruising maps and guides. I must also mention the yachties and people of Tasmania for so often taking pity on two little yachtspeople and providing lifts, meals, showers, flathead, company and advice.

Proud to be RG1092, Adam Gittins and Anna Broome of the little sailing vessel Alibi (not forgetting Toto, the tiny tender)