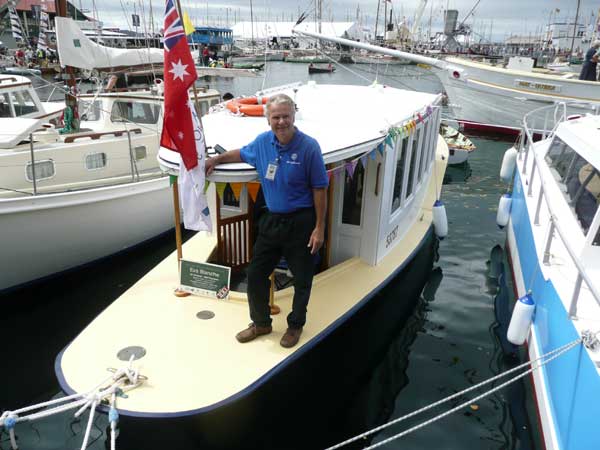 David Conway (RG289) is one of Tas Maritime Radio's newer members. In February he sailed his vessel, the MV Eva Blanche from Franklin to Constitution Dock in Hobart to participate in the Australian Wooden Boat Festival.


When we asked David to provide some history of this historic vessel for our website, he readily agreed and provided the following story.

The main sources of information for this brief history are May, N (in draft), Industrious, Innovative and Altruistic: The 20th Century Boat Builders of Battery Point, and Broxham, G (2006), Those That Survive.


Eva Blanche was one of three vessels in the Royal Blue Motor Launch Line (RMBL) operated by Arthur 'Tucker' Abel from Waterman's Dock in Hobart from 1911 to 1922. Tucker Abel was the first major operator of motor launches in Tasmania and also operated a substantial boat yard at Battery Point until it was partially destroyed by fire in December 1917. Among other ventures Tucker continued to build smaller vessels and dinghies until his untimely death in 1938 in a car accident.


Eva Blanche is believed to be the sole remaining member of the RBML still afloat.


Eva Blanche was launched on 18 October 1910 according to the 24 October 1910 edition of the Daily Post, a Hobart newspaper. The article describes her as

one of the finest of its kind. Is built especially for tourist and pleasure parties by the ownser, Mr A Abel.


The article goes on describing Eva Blanche as being

built of Huon pine, copper fastened with kauri decking. Her length ove all is 34 foot and beam 8 foot. Her cabin is glassed in and she has an open cockpit of 20 feet which is the largest of any boat in the river leaving ample room for large fishing parties. She is fitted woth an 8 BHP Frisco Standard engine and has an estimated speed of 8 knots. The new craftwill be an ideal vessel for the purpose for which she is intended.


Eva Blanche was to be

This is presumed to be Waterman's Dock. Her first trial was to be the following week.


Eva Blanche was advertised for sale on 12 December 1922 and was bought by Mr A Hammond of the Huon Valley. There Eva Blanche carried both people and cargo - mainly apples - around the lower reaches of the Huon River until the 1940s.


From then until the present time Eva Blanche has been in the Rodway , Coad, and Conway families as a pleasure craft. During this period her foredeck was raised to make her more commodious.


In 2008 Eva Blanche was slipped and underwent an extensive renovation and repair over the next 10 years by the Conways (the current owners) at Cygnet. This involved replacing 60 metres of hull boards, a new aft deck, stem and stern posts and cabin. A 30 HP Kubota Beta Diesel motor replaced the Perkins diesel present at the time of slipping. The new motor was positioned further towards the bow similar to her original design. The cabin is configured more in keeping with her ferry roots.


Eva Blanche was relaunched at Port Huon on 26 March 2018 and currently resides at Franklin Marina.